As summer winds to an end here in Vancouver, we welcome back the cool breeze of autumn and prepare for the snows of winter. Even though the sunshine may not be appearing as much around Vancouver, autumn is the perfect time to explore the many trails and parks surrounding the city while being sheltered by the beautiful canopy of changing colours. Immerse yourself in Vancouver’s vibrant coastal temperate rainforest by hiking some of its best trails through the eyes of a Vancouver native. Just don’t forget to bring a rain jacket!

As the crown jewel of Vancouver, Stanley Park has been hosting and inspiring locals and visitors alike since its creation in 1888. Named after Lord Frederick Stanley of Preston, the sixth Governor General of Canada, Stanley Park boasts many activities and amenities including the Vancouver Aquarium, Brockton Point, Second Beach and more notably, the Stanley Park Seawall.

The seawall stretches for 9 kilometres/5.5 miles around the perimeter of the park, snaking next to the shimmering waters of Burrard Inlet and English Bay. It offers arguably the best view of the skyline of Vancouver’s downtown core as well as the North Shore Mountains, all on one multi-use path. The Bigleaf Maple and Black Cottonwood trees that border the seawall create a beautiful collage of colour as they bask in the autumn air. Other highlights include Siwash Rock, the Girl in the Wetsuit statue, and passing underneath the famous Lions Gate Bridge. 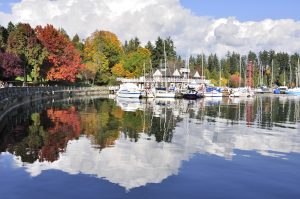 The seawall isn’t the only pathway that showcases the grandeur and beauty of Stanley Park; a huge network of trails cuts through the centre of the park amongst Western Red Cedar and Douglas Fir groves. Beaver Lake sits in the middle of Stanley Park and is a worthy destination. The lake's surrounding environment showcase a range of flora and wildlife including salmonberries, sword ferns and its namesake beaver family.

Access to Beaver Lake can be gained from a multitude of trails but is easily reached from Pipeline Road or the Ravine Trail. The #19 bus, which can be caught along Pender St. in downtown Vancouver, travels into Stanley Park and stops along Pipeline Road very close to the lake. 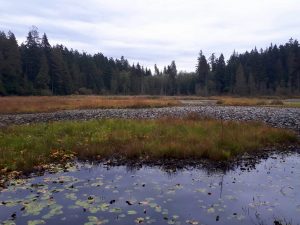 Located on Vancouver’s beautiful North Shore, Lynn Canyon is a stunning destination that showcases a quintessential British Columbian rainforest. The canyon itself features steep cliffs, gorgeous waterfalls and thick moss that hangs from precarious alcoves. A series of trails follow the rim of the canyon and attain destinations including the 30-foot pool, Twin Falls, and the main attraction, the Lynn Canyon Suspension Bridge. 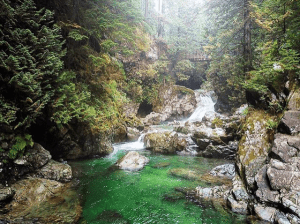 Entering the park is completely free. However, keep in mind that Lynn Canyon can be extremely dangerous, especially during wet conditions.  Stay on the marked trails and reference the onsite maps highlighting the distance to various destinations.

Upon arrival, start walking past the first parking lot, you’ll come across the Ecology Center on your left and a café on your right. The Ecology Center is worth browsing to learn about the local plants and animals. The suspension bridge is immediately across from the café. Once across, you can take a left turn which takes you to the pristine, calm waters of the pool. Or, you can take a right turn which takes you to the aptly named Twin Falls. Walking out and back to either destination will take about an hour.

Lynn Canyon used to be a local secret but has since become increasingly popular with both locals and tourists. It’s easily accessible by public transit; from Lonsdale Quay in North Vancouver, which can be reached from Downtown Vancouver via the Seabus from Waterfront Station, take either the 228 or the 229 bus to Lynn Valley Center. From there, you can either take the 227 bus or walk the 15 minutes up Lynn Valley Road to Lynn Canyon. There is also plenty of parking in the park if you’re driving there yourself.

Quarry Rock in Deep Cove, North Vancouver, is another classic Vancouver hike. The trail to Quarry Rock traverses a gorgeous forest that sits on the north side of Mount Seymour. Huge deciduous trees dominate the landscape and the waters of gurgling streams bounce off the mossy rocks. Once atop Quarry Rock, a unique view of Deep Cove presents itself. Despite the geographic solitude of this granite summit, somehow, you’re only 2 minutes away from Vancouver.

It’s true that an inordinate amount of people frequent Quarry Rock in the summer months. However, it is a worthy autumn destination because of it’s amazing views and varied landscape. The autumn season is also sure to dissuade many parties from heading out onto the trail.

At the Gallant Avenue and Panorama Drive intersection in Deep Cove, the trailhead is 500 meters north on Panorama Drive. The trail to Quarry Rock starts on your left and is on the first section of the Baden Powell trail, a 48km/30-mile-long trail that traverses the entire North Shore. Continue following the blue and white Baden Powell markers for another 2km through undulating terrain until you reach the magnificent viewpoint. Round trip, the hike should take between an hour and a half to two hours to complete. 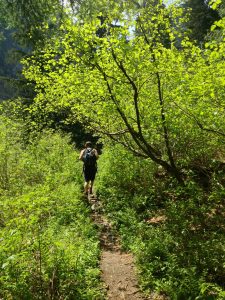 Taking public transit to Deep Cove from Downtown Vancouver takes about an hour but is easily doable. From Lonsdale Quay in North Vancouver, take the 239 bus to Phibbs Exchange. From there, take the 212 or 211 bus to Deep Cove. There is also ample street and public parking in Deep Cove. Once you return from the hike, don’t forget to stop at Honey’s Doughnuts and Goodies in Deep Cove. Try the maple-bacon doughnut if available!

Autumn is a peaceful and charming time of the year in Vancouver. Nowhere else is this change felt more than the trails and forests that encircle our marvellous city. There are plenty of other places to explore besides the ones mentioned above. Happy exploring! 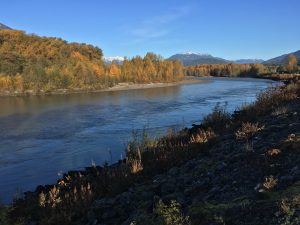 Always remember to prepare when venturing out into wilderness areas. Bring food, water and clothing and tell someone where you’re going and when you’re expecting to return. Autumn in Vancouver also means shorter days, colder temperatures and more difficult trail conditions. Visit the Adventure Smart website to learn more about trip planning for any hike.