Ancient Egypt has always enthralled the world with its mysteries. So when the Royal BC Museum announced its latest feature exhibit, it was easy to see why people began planning their next trip to Victoria. Given the enchanting title of, “Egypt: The Time of Pharaohs,” visitors have the chance to explore the wonders of the ancient Egyptian civilization.

Exhibits of this grandeur are usually something you’d find in the halls of European museums. In particular, many people are excited about the fact that this exhibit offers an in-depth look into the entirety of the Egyptian culture. 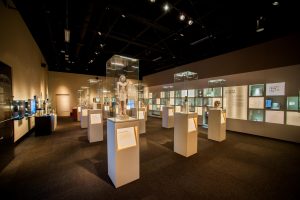 The overall verdict? Whether you’re an amateur archaeologist or someone looking for something to do this weekend, this exhibit should be on everyone’s must-see list.

The exhibit showcases history ranging from the Predynastic Era (5000-3000 BC) to the Greco-Roman Period (333 BC - 313 AD). Within these periods, the displays are then divided into sections illustrating aspects of average life for the Egyptian people. These sections include:

Many of the visitors seemed to favour the sections that focused on the mythology, the pharaohs, and the funeral preparations. That might be Hollywood’s influence since the movies tend to focus on these aspects, but it was interesting to see fact separated from fantasy. 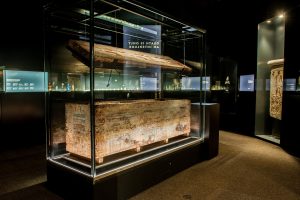 Here you get to see the complexities of a culture where most everyday things symbolized something far grander. Animals were not only food but sacred pets or the symbols of gods. The pharaohs were labelled the divine rulers of Earth, and the middlemen between the gods and people. The gods themselves were found in every part of life and held supreme power.

Each area of the museum was lined with dozens of artifacts, some of which are thousands of years old. Various interactive elements also exist, making this exhibit great for kids. The presentation of the content wasn’t overly text-heavy and offered lots of visuals. It was also easy to follow along with the story being told, as guests aren’t lost within a sea of technical terms and historical figures. 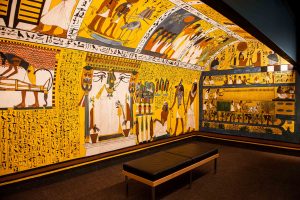 Reading between the lines, however, the exhibit’s sections each uniquely address a few overarching topics. The themes of power, prosperity, and the struggle for eternal life follow guests throughout their visit. As a result, you leave the museum with a sense of curiosity regarding the secrets of the pharaohs and how history really came to be as it’s known today. 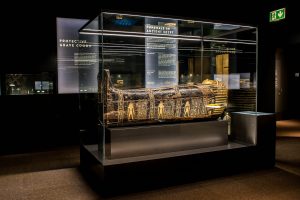 To summarize my recent visit, I was left in awe of the incredible achievements of the ancient Egyptians. The very first sign you see once you’ve entered the exhibit perfectly describes what a guest will experience, with the statement, “Let’s Travel Back in Time.” 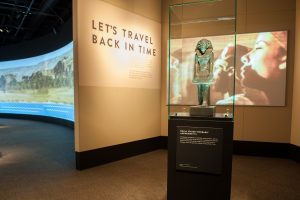 Entrance to the exhibit is available as an additional purchase on our Victoria & Butchart Gardens Tour. See Royal BC Museum for more information.